How Twitter Can Be Used as a Powerful Educational Tool

Think Twitter is just a waste of time? Think again. Its organizational structure makes it an effective tool for connecting with students and others online.

On Feb. 10th 2011, the world was transfixed on the protests raging in Egypt. We all watched as thousands gathered in Tahir square, where they had been for the past several weeks, to listen to a speech by President Hosni Mubarak. Many figured this would be his resignation speech. Instead, it offered the citizens of Egypt very little in the way of change, even if it was being presented as something positive. For outsiders looking in, it seemed that the situation would only get worse.

Join us at BLC19 to share strategies to teach critical thinking on the web and many other leading edge topics. BLC19 is Massive fun for the brain and heart.
Educational Conference for teachers 2019

What Mubarak might not have known is that while he was trying to maintain his iron grip on power, thousands of Egyptians were tweeting about their frustration with the dictator. Eventually, the people on the street, armed with nothing more than a cell phone and a free social media site, changed the course of history. If you are a middle or high school social studies teacher, and you wanted to provide your students with a close-up view of the events unfolding in Egypt, you could turn to a traditional news service. Or, you could follow the hashtag #Egypt on Twitter and tap into the real-time pulse of unfolding events by people on the streets of Cairo.

Through our previous articles, we have introduced you to three pillars we believe are essential to be Web literate. We have shown you how to use advanced search techniques to raise the quality of information found on the Web, and we have explained how the information you find can be organized into a comprehensive library of knowledge using powerful Web tools like Diigo. In this final part to the series, we will demonstrate how tools like Twitter can allow a researcher to share what is learned with the world, tap the knowledge of others to help make even stronger connections with the material, and even provide students with real-world problems at a moment’s notice.

At first glance, Twitter doesn’t appear to hold much value. Who cares about Justin Bieber’s haircuts! In fact, we both saw it as a waste and quit using it two or three times until we truly understood the organizational structure of information within this tool. Learning how to filter through tweets, organized using hashtags, will bring clarity and meaning to Twitter and will get you past the mosh pit of random thoughts and lackluster chitchat.

A hashtag is nothing more than a word or phrase (with no spaces) that is preceded by a # symbol. Examples include #edchat, #london2012, and #youthvote. Simply type a hashtag like one of these into Twitter’s search box to immediately generate results that are focused around the topic of your choice. Tagging is a beautiful thing, and a tag is something you can invent at any moment.

If you’re interested in a topic, but you don’t know of a hashtag that will be helpful with your research, simply do a search in Twitter using a keyword rather than a hashtag. Then, scan the results to see what hashtags people are using when they are discussing that particular topic. For example, Brian did this the evening of President Mubarak’s speech, and he discovered that the two most popular hashtags being used at that time were #Egypt and #Jan25. By looking through the resources he found, he was able to see what the world was saying about this event. But then, Brian took it a step further. He began a new Twitter post and typed in:

I wonder if the people in #Egypt are buying this? #Jan25

Upon posting, his message immediately gained a global audience interested in this one topic. Within minutes, he had a response back from a woman in Cairo who confirmed his thinking: The Egyptians weren’t buying it at all! They chatted for a while, and at the conclusion of their conversation, he asked if she would be willing to Skype into a class of middle school students and teachers with whom he was working the next day. She agreed, and the students were able to ask her questions about what they had seen on television the evening before, about life in Egypt, and about her hopes for Egypt’s future. It was a powerful moment for everyone involved.

Reflecting back on this series of events, we have learned to appreciate the power of a social media tool such as Twitter to provide information and global communication. The role and knowledge of the educator is more important than ever in understanding how to use these tools to bring authentic experiences to our students. Unfortunately, many students do not see the educational value of a tool they might be using every day.

Any school or classroom can begin using Twitter as an important part of the learning process. To help the beginners out, we’ve developed a list of educational hashtags that can be used by teachers and students who are looking to connect beyond the classroom. Our recommendation is to print this list and hang it in the classroom near a classroom computer. With a classroom account (under a teacher’s login and password), anyone in the class can tweet out questions requesting resources or sharing the learning that is taking place in that class. The appropriate hashtags should accompany each message. These messages might look like this:

Looking for global classrooms that can record their local water data to share with us over the next 12 months. #scichat

We are looking to shake up professional development in our district. What are some unique models you use. #profdev

Our class is looking to collaborate with another class to write and produce a PSA on #bullying and #cybersafety.

In addition to using Twitter as a way to connect globally, we’ve also seen examples of classrooms using Twitter as a way to share learning opportunities with others outside of the classroom. For example, supplementary photo and video tools provide the ability to share learning from anywhere someone can access an Internet connection. This could be in a classroom, it could be on a field trip, or—as Jessica Caviness from Coppell High School in Texas explained to us—it could even be from a baseball game.

Mrs. Caviness was a new Twitter user who had attended a workshop of ours. Upon getting back to school, she told her geometry students that she just got a Twitter account. After jokingly welcoming her to the 21st century, students immediately began taking out their cell phones and following her. Then, a few nights later at a Texas Rangers baseball game, she was reminded of a problem from class a few weeks earlier. She decided to tweet the following, and within minutes, she had several replies from her students.

Days later, at yet another game, Mrs. Caviness decided to dig a bit deeper into students’ thinking. She tweeted a new picture and asked students to develop related problems. 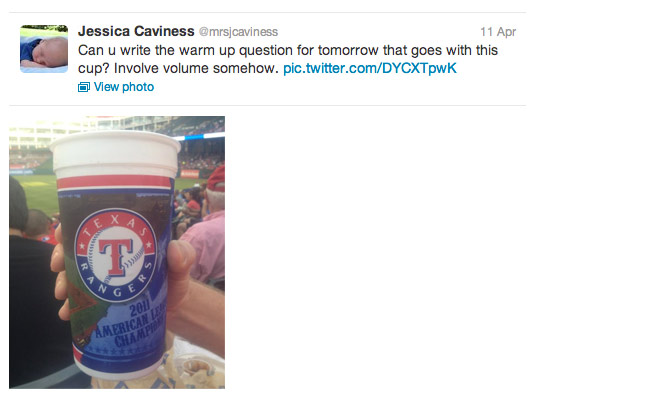 Again, students jumped on this opportunity immediately. Before the game was over, she had quite a collection of student created problems including:

What Mrs. Caviness found most exciting was the fact that students dropped everything they were doing at home so that they could connect with her around these short math blasts.

Now, Mrs. Caviness sees many applications for using this tool to strengthen what students do at school each day and to build a library of material that she and her students can use in a flipped classroom environment. We invite you to read more about her class and their uses of Twitter. You might also choose to follow Mrs. Caviness on Twitter.

We believe that there are three essential skills represented by the stories in this article:
Teachers should have the skill set to build their own personal learning networks to be global.

Let us know your thoughts.

Led by Alan November and based in Marblehead, MA, November Learning equips teachers and administrators to motivate students to own their learning and make global connections by using effective technology and implementing rigorous assignments. Through our annual Building Learning Communities® conference, professional development services and extended resources, our team of experts empowers educators to enact powerful changes across the curriculum, drawing on students’ abilities to think critically, communicate globally, express creativity and collaborate across several types of media.

All Teaching and Learning Articles

Solve to Involve: The Power of Students Designing Their Own Problems

Best Use of Teacher Time in a Connected World

Digital Citizenship Lessons From A 9-Year-Old With 18,000 Twitter Followers

Inviting Global Perspectives into the Classroom

Write for My Teacher, or Publish to The World?

Networks for Lifelong Learning: A Tale of Two Students

Crafting a Vision for Empowered Learning and Teaching: Beyond the $1,000 Pencil

Mission Critical: How Educators Can Help Save Democracy

Archive.org and the Wayback Machine: Essential Research tool for Every Educator and Student

The Advanced Google Searches Every Student Should Know

Why Do Students Pick Teacher A or Teacher B? Who Would You Pick?

Walk Through for Innovation: Six Questions for Transformed Learning

Why Schools Must Move Beyond One-to-One Computing

Drill the Teachers, Educate the Kids

Designing Libraries: Learning for a Lifetime

Creating a New Culture of Teaching and Learning

Beyond Technology: The End of the Job and the Beginning of Digital Work

Get Our Latest Professional Development Articles, Web Literacy Resources, and much more!

A resource no educator should be without!
We are GDPR compliant.

Powered by Convert Plus